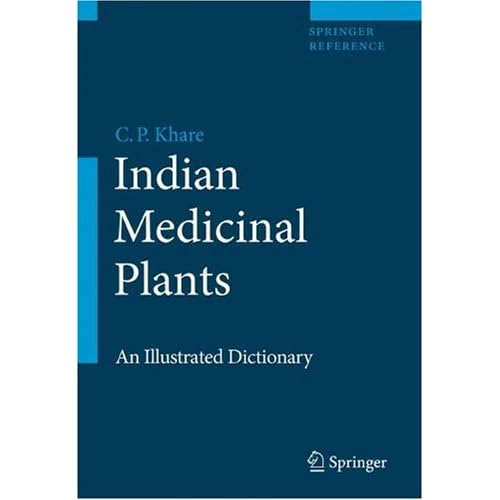 md5: 823c09bdd34bee628dbc69bff11f2769
size: 7.94 MB [ 8325228 bytes ]
type: .pdf
status: normal
language: en [ english ]
submitted by: anonymous
Publisher: Springer
Number Of Pages:
Publication Date: 2007-07-14
Sales Rank:
ISBN / ASIN: 0387706372
EAN: 9780387706375
Binding: Hardcover
Manufacturer: Springer
Studio: Springer
Average Rating:
Total Reviews:
Book Description:
In 2004, Springer-Verlag Heidelberg published C.P.Khare’s “Encyclopedia of Indian Medicinal Plants” which contained 400 monographs comprising classical as well as contemporary research findings.
“Indian Medicinal Plants. An Illustrated Dictionary” is the second major one-volume reference work by C.P.Khare which has been dedicated to the distinguished scientist, Dr. A.P.J.Abdul Kalam, who did pioneering work by reviving the glory of medicinal and aromatic plants in Rashtrapati Bhavan.
Scientific monographs of “The Wealth of India” series (17 volumes) have been capsulised in the dictionary and corroborated with the judicious findings of German Commission E, European Cooperative on Phytotherapy (ESCOP) and WHO. Therapeutic leads, active indications and contraindications are salient features of the core text. These are based on herbal pharmacopoeias, compendiums and latest editions of standard reference works like “PDR for Herbal Medicines,” “(Laurance) Review of Natural Products”, “Natural Medicines Comprehensive Database”. Leads for further research have been provided at a number of places.
The Dictionary is the first updated source of Ayurvedic, Unani and Siddha synonyms of their botanical counterparts, after a gap of more than 30 years. The synonyms which appeared in “The Wealth of India” series (1948-1976) and in Chopra’s “Glossary of Indian Medicinal Plants” (1956) have been updated till January, 2007.
More than 2000 medicinal plants of “The Ayurvedic Formulary of India” and “The Ayurvedic Pharmacopoeia of India” and more than 100 species of non-Indian origin, incorporated in “National Formulary of Unani Medicine” have been covered in
HOÀI SƠN

the Dictionary. Divergent sources of Ayurvedic, Unani and Siddha herbs have been identified and a number of controversies have been sorted out.

Pharmacognosy experts have selected important herbs, which were specially collected from leading pharamaceutical companies and pharmacopoeial laboratories and included in the dictionary as four colour photographs under the “Crude Herb Identification Guide” section. This is a unique feature and makes it an exclusive treat.
The Dictionary has been presented in a user-friendly format, as a compact, handy, easy to use and moderately priced one-volume reference work. It unfolds hidden virtues and potentials of Indian herbs for busy professionals, researchers, practitioners of herbal as well as modern medicine, and library frequenters. It will prove a ready information source for students of botany, economic botany, pharmacy, agricultural and medical sciences, who aspire to have an edge over others and are keen to keep themselves abreast of the times.
Bào chế CHỈ XÁC (quả trấp)-Citrus aurantium L.